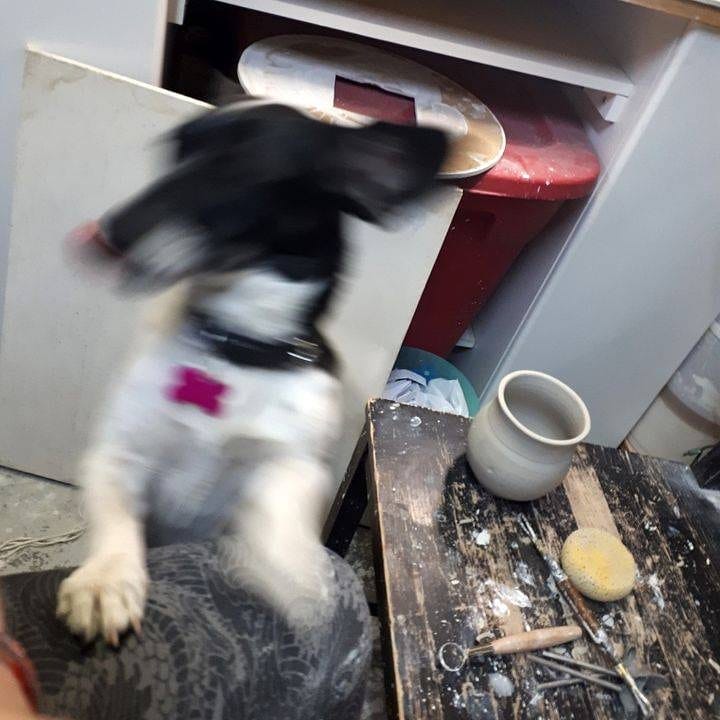 Studio assistant // This blurred image is Lily. Lily is some strange mix of terrier and dachshund. Or cat. And something very very fast. She’s very very #helpfail when we are working on projects because she really likes to be near us, which does not help since her input is rarely useful. She is mostly in it for the snacks, if you must know. She spent our house painting project woefully penned in a bedroom after being unable to resist dipping her rear into paint. Repeatedly.

Anywho, this is now our one and only four legged studio assistant. She was still enough for me to capture just one photo of her in the studio where she isn’t just a blur. She is mostly just a blur though, so the three blurring photos are the more accurate representations of what she looks like. We haven’t moved an acceptable dog bed into studio yet so she spends her time split between pacing, crying, jumping up on my knees, and hunting mice while knocking over our chaos. She’s rather be out in the yard, digging giant holes and eating snacks, or snoring on the couch under a blanket. I can’t fault her for that.
.
.
.
#studioassistant #studiodog #canadianceramicsstudio #albertapottersassociation #artistlife #makerlife #studiolife @albertapottersassociation

.
[image description: a variety of photos in a ceramics studio taken from behind the pottery wheel. There is a small black and white jack russell terrier with a black collar with pink bone tag, pawing up at the potter’s leg. The dog is a moving blur, not in focus except for the last photo, where she sits on the floor in front of a variety of glaze chemicals and bagged clays.]