I mentioned my introduction to diz earlier. They’re one of the most freeing pieces that I make because they have only a two requirements:

I use diz to create tiny collages of stamps and textures that have found their way to my bench. They don’t require much for fancy equipment in their creation, unlike my wheel thrown pieces. They don’t have to match any others, unlike my buttons sets. They don’t have to be a certain size, a certain convex/concave setting, or even any specific number of holes. They are the item that allows for the largest expression of creativity in a small package. Although they aren’t demanding in equipment or design, they do make up for that by requiring several stages of smoothing and sanding to ensure that no bit of fibre will ever be caught on a rough edge. So we have an agreement: I make them look like whatever moves me today, and they just want to be smooth. 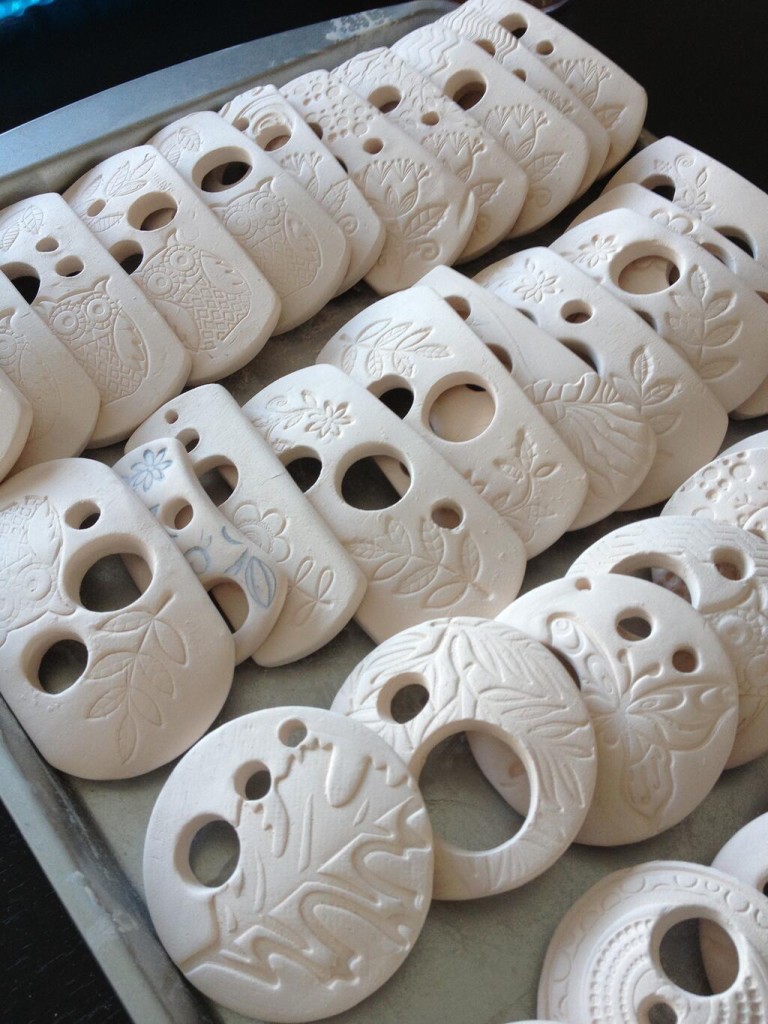 I’ve tried to make them alike, I really have. One of my goals for 2014 was to create a concise product line for 50% of my items, leaving 50% for seasonal sets, creative ideas, custom orders, other types of items. In the photo to the left, you can see in the top right that I tried to use the same tulip stamp and then owls but… that was boring fast so the other end of each is completely different.

Really, why buy handmade if it’s all going to look exactly the same?!?

My new goal for product lines has become less exact. I now aim to carry “rectangular diz” and that should make everyone happy. Each one will be different to keep me joyous while creating, and diz-lovers can know that there will be rectangular dizzes in the shop for those that prefer that soft curve to the round convex or concave.

For those of you, like myself at one time, that have no idea what the heck a diz is or why you’d ever want one, I have found a video! This video by WoolWench shows a diz being used with a hackle to blend colours to spin into yarn. The diz is used at the 1:36 mark. For people that haven’t even seen how yarn is made, this shows some great details in a quickie 3 min video.

Making your own roving with a hackle and diz, by WoolWench