I am passionate about working in clay. Passionate. I use it as a meditation, creative outlet, to show love to others, to show love to myself. The calm I feel when on the wheel is sometimes all I need to center myself during a stressful day. When people ask me what I make on the wheel, I want to say “peace” (and then I want to gag because that’s pretty darn cheesy).

I tell you this because something pretty serious happened on Saturday. My pottery wheel stopped working.

Well, it didn’t so much stop working as… well, I couldn’t throw.

I struggled so much when making the first in this new tea cup series last weekend. It was wonky and I had to work longer and with more concentration than I have in years. I thought I was having a Bad Day or had low blood sugar or the moon was in mercury so I focused on other things for a week. Then I came back and tried again and when the next two were even more difficult to throw, I realized that Something Was Wrong. At first I thought I was succumbing to fumes since I share space with my husband and he had been working on something smelly the night before. I opened the overhead doors and took a break but upon returning, my mugs were still wonky and hard to make and I was starting to think maybe, just maybe, I was having an aneurysm. Or I’d forgotten how to throw.

Midway through Saturday, neighbours came by to visit and while standing across the room, I glanced back and WOW, that wheel was hella crooked. The difference in height on each side of the wheelhead was almost a quarter inch. “Hallelujah! It’s NOT me!” I said to myself. And then it dawned on me. Or more like hit me like a bullet. THE WHEEL WAS BORKED.

My first reaction? PANIC. My second was to call everyone I know for help. Unfortunately, that “everyone” was a writer, an accountant, an office manager and my husband who, although mechanically inclined, was having one of those back-pain episodes that is best described as incapacitating. My mom was out of country but I didn’t think calling her would help because I’d just bawl into the phone. Telephoning sometimes does that to me. I called the only ceramics dealer in the area but they were already closed.

Once everyone had left, I did the only thing I could think of and I marched into the studio, grabbed a big bin of metal thingies and I started taking my motorized kickwheel apart. With TOOLS. I used a rubber mallet at one point. It was liberating and terrifying but I thought “self, it’s completely borked. It’s rotating off by at least 5 degrees. You can’t break it any more than it already is”.

I then took a bit of a break to cry. I’m not ashamed. I was so angry and panicked and generally out of my comfort zone by about a lifespan that I just had to sit for a bit. I stared at my wheel and knew she was dying. That didn’t make things any better so I imagined I was the ambulance crew and dammit, she’s not going without a fight! (plus replacing her is a minimum of $600 and that brought me to tears again so I really really needed to figure out how to save her).

I did find out what was wrong and we all scratched our heads. The entire wheelhead and flywheel mechanism was tilted in a way that the wheel didn’t shudder or wobble – it was evenly tilted but crooked enough to make throwing a struggle. But how to fix it? The husband had recovered enough by Monday to figure that the entire frame of my wheel had been twisted rather severely. Was there a tornado we’d missed? Was there a mosh pit in the studio while we were on vacation? No matter – his welding magic had my baby leveled in time to try it on Monday evening.

The wheel is fixed.

So let me introduce my new line of spiral lotus flower tea cups – born from struggle and surviving in peace. They’re in progress here while I decide what colour they want to be: 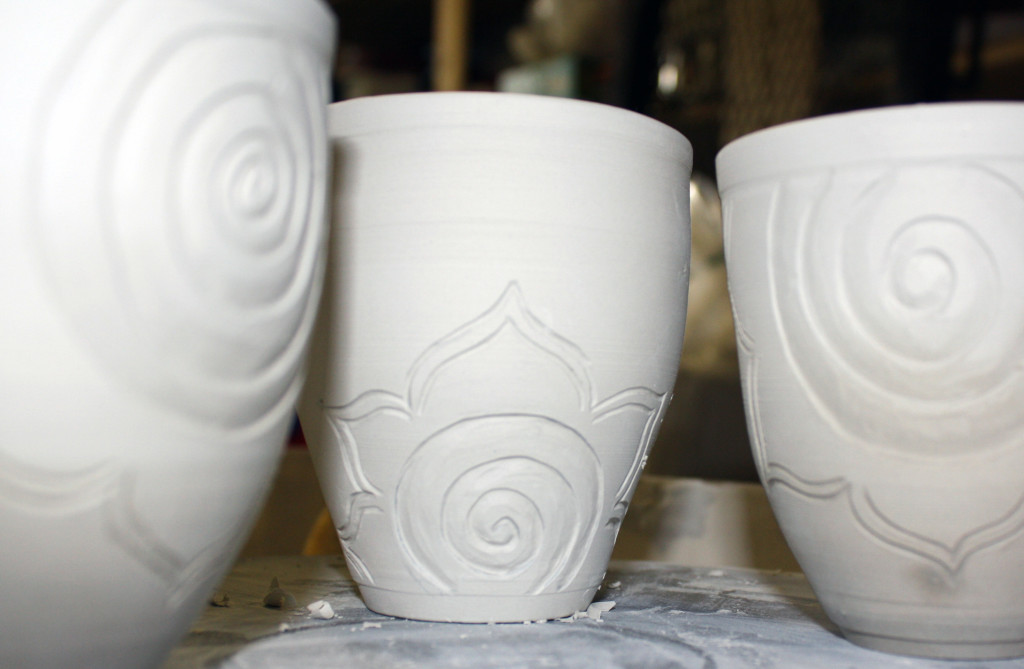