We are grinning from ear to ear – our first bisque firing in the kiln was an overwhelming success! We started at 7:30pm and by 1:20am, had definitely exceeded our goal of cone 05. 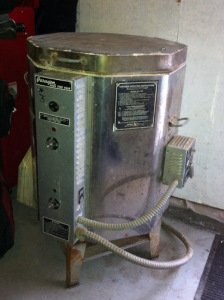 With 220 power run out to the garage, a fried kiln switch swapped out, bricks assessed and all kiln elements tested and reseated, we loaded her up with just two pieces of greenware. Ceramics Canada graciously gave us a couple of 05 witness cones and with the cone in place and Paragon’s firing schedule in hand, we fired her up. Every hour I went in and turned her up a bit more until we were full on high-high at 11:30pm. We had a bit of a snafu with the kiln sitter but after we realized we’d put the wrong cone in (017 instead of 06. Ooops), we turned her back on and continued monitoring.  The witness cone was impossible to locate by 1:00am so after we each took a turn trying to locate it visually through the molten orange peephole, we turned her off. 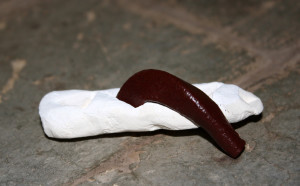 The next morning, I opened the kiln and the witness cone was definitely toast, overfired. Good to know for next time – and now I know, don’t fire by time alone.

Tonight we glaze the last pot then Jay will do the glaze firing during the day tomorrow. I have an underglazed test piece that went through the bisque that I’ve coated in clear glaze, plus a few pots in Mayco’s Midnight Rain and one pot in Mayco’s Cinnabar:

The studio atmosphere is EXCITEMENT. Opening the kiln on Friday will be like Christmas morning. I’ll upload photos of our results.